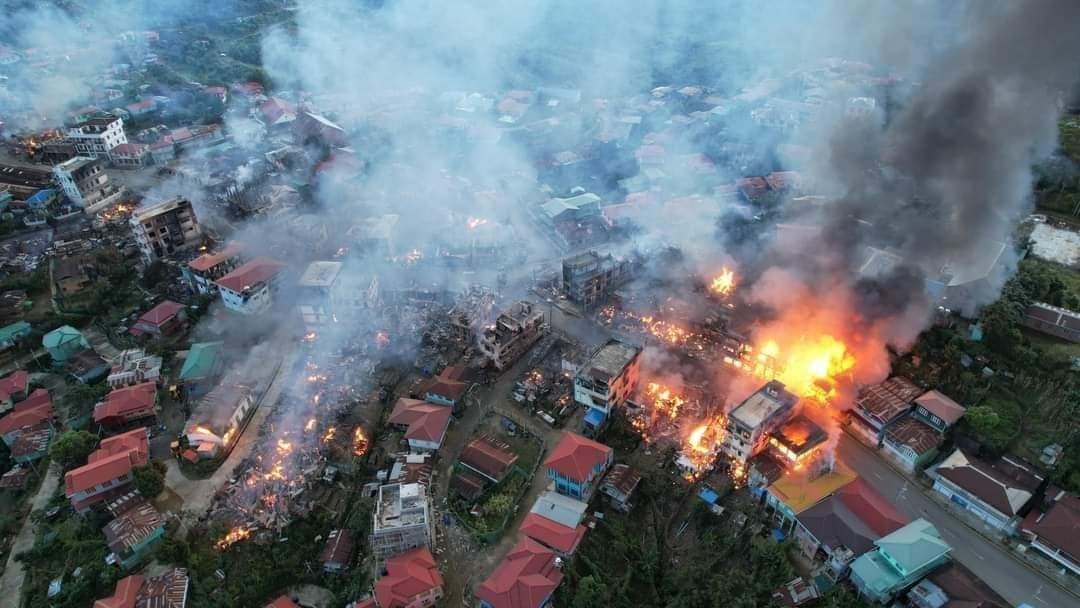 Local media reported that hundreds of buildings were set on fire by Myanmar’s junta troops during a three-day raid in Myanmar’s north. This was part of the military’s struggle to crush the opposition.

Since the coup, violence, and reprisals have been rife in the Sagaing region. Local “People’s Defence Force (PDF) members have clashed with junta soldiers regularly.

Analysts believe the effectiveness of the informal militia has shocked the junta forces. The military has also called in air strikes on several occasions to support its troops on the ground.

Locals and media reports stated that hundreds of buildings were set on fire in the villages of Kinn and Upper Kinn by troops over three days last Wednesday.

According to one resident, Kinn residents fled Kinn as soldiers approached them and started shooting into the air on May 26.

“The next morning, we saw smoke rising from the village before they left.

“Over 200 houses were destroyed… my house was completely burned to the ground, and only the concrete foundation remains.”

Drone footage purporting that it showed the aftermath, obtained by AFP, showed smoke columns rising into the air from the villages along a roughly eight-kilometer stretch of the Chindwin River.

The video shows a health clinic that matches the location of one in Ke Taung village.

AFP digital verification reporters confirmed that the footage was not available online before last week, but was unable to independently verify reports from the area.

Aye Tin, a Ke Taung villager, said that soldiers “raided and damaged our houses”. She requested a pseudonym.

“They also burned motorboats that we use to transport food and carry water for our village, including mine.

“My life has been ruined. I lost my home. I have nothing to earn a living.”

The junta previously denied that its troops had set fire to houses and accused “terrorist” PDF fighters.

Min Aung Hlaing, the chief of the junta, stated Tuesday that “every effort was made to minimize the casualties in counterattacks against terrorist acts.”

According to the state newspaper, The Global New Light of Myanmar, he stated that “Now, the country has found tranquility.”